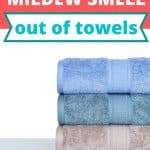 Smelly towels is a common household complaint, and honestly there’s nothing worse than getting out of a hot shower and drying off with a stinky towel!

For a while I just thought all towels eventually started to smell sour and that there wasn’t really anything I could do to remedy the problem.

Eventually I got so fed up with the stink that I started doing some research and after several loads of trial and error, I’ve come up with the best solution on how to get the smell out of towels, for good!

Why do my towels smell so bad?

Essentially your smelly towel issue is likely a result of one of the following issues– either you’re not allowing the towel to fully dry when it’s wet, you’ve got quite a buildup of detergent and/or fabric softener in your towels, or you’re leaving towels in your dryer for too long and humidity that comes in through the dryer vent is causing them to develop quite a funk.

Additionally, front load washers are notorious for mold and mildew growth, and if you’re washing towels in a washer that’s got mold growing they won’t smell fresh, ever.

You’ve got to kill the mold in your washer first, before attempting to get the smell out of towels.

Figuring out the root of your issue will help you correct the problem in the future.

For most people complaining about smelly towels the root issue is usually a combination of most of these common issues.

How to get mildew smell out of towels

Most people incorrectly assume they can just toss smelly bath towels in the washer on high and fix the problem–not so.

To truly remove the stink out of towels, you’ll need to follow a fairly easy formula:

Make sure you wash towels with vinegar on the highest water setting possible.

Step 2: Select the highest temperature setting on your washer

Note: You may need to temporarily bump up the settings on your hot water heater. You need this water to be hot for this process to work!

This time you’ll toss ½ cup of baking soda in the drum of the washing machine or where you put powder detergent. Make sure to use the highest heat setting.

You want to dry your towels using the highest heat until they are fully dry. If you were dealing with towels that were truly stinky, it’s a good idea to put towels out in the sun. The sun is amazing at getting that moldy, mildew smell out of items.

If you live in an area with high humidity; especially in the warmer months, your towels could be stinky because you’re leaving them in the dryer too long.

You want to quickly remove towels once they are done drying so you don’t allow warm, humid air to come in through the dryer vent and moisten your towels.

Remember, a towel that isn’t fully dry is a wonderful breeding ground for mold and mildew.

What if the wet towel smell is still lingering after the initial cleaning process?

If you tried steps 1-5 and still smell mildew on your towels, it might be time to bring out the big guns.  Here are some great tips to help your towels smell fresh and clean:

Get rid of that lingering sour towel smell using borax

If you thought baking soda was good at getting the sour smell out of towels, you’ll be blown away by what borax can do.

If you’ve completed the process above with vinegar and baking soda and your towels still stink or smell like mildew, try using borax.

To complete this process, turn your water settings on high or sanitize, put ½ cup of borax in where you’d typically place the detergent and fill fabric softener spot with 1 cup of vinegar.

Additionally, you can try laundry stripping-which is the process of soaking clothes/towels in a mixture of detergent, borax and washing soda.

How to keep towels from smelling in the future

Now that you’ve deep cleaned your towels and removed the mold and mildew, you’ll want to keep them that way! Here’s how to prevent your bath towels from stinking again:

It doesn’t matter how vigilant you are about making sure your towels don’t smell like mildew again, if you never clean your washer, eventually, your towels will just start to smell.

Don’t use too much detergent

Many people use way too much detergent; especially those that have a front load washer.

You really don’t want to be filling up your detergent past the 1 mark if you have a HE washer, as this detergent is so concentrated and has a hard time washing out of towels if you put too much in.

Don’t put wet or damp towels in your hamper

I’m totally guilty of putting damp towels in my hamper and then forgetting to wash them for a couple days.

This practice simply invites mold and bacteria to grow, giving way to those nasty mildew smells. Leave your towels hanging up so that they can dry completely before tossing them in the hamper.

Fabric softener is typically one of the biggest culprits for causing stinky bath towels. Fabric softener is actually an oil and used every wash, this creates quite a build up on your towels, which is where the stench comes from.

Skip the fabric softener altogether and instead opt for ½ cup to a full cup of vinegar to your rinse cycle.

Routinely add vinegar to your wash

About once a month, I’ll go ahead and add a full cup of vinegar to my load of towels. It keeps the smells at bay and keeps me from having to deep clean my towels all of the time.

Sometimes I throw some baking soda in the drum of the washer to give it that cleaning boost, too.

Why does baking soda work in laundry and is it okay to put it in the washing machine?

Baking soda is not just okay in the washing machine, it’s great. Because of its ingredients, baking soda naturally balances pH levels, neutralizes odors and leaves clothes fresh, and even soft!

Baking soda is great for getting the stink out of towels, workout clothes, kids clothes and anything else with a mildew smell. Some people even add ½ cup of baking soda to each heavy load, just to give laundry detergent that extra boost!

Removing mildew smell from towels isn’t impossible, but it does take some work; with a little effort towels will come out clean, fresh and soft!

How to clean a front load washing machine

How to get smell out of towels in 5 simple steps

Ashley Bryant is a Certified True Colour Expert, design enthusiast and co-owner of Home Like You Mean It. Together Ashley and her husband, Daniel help homeowners renovate and decorate their home by sharing their knowledge, expertise and passion. 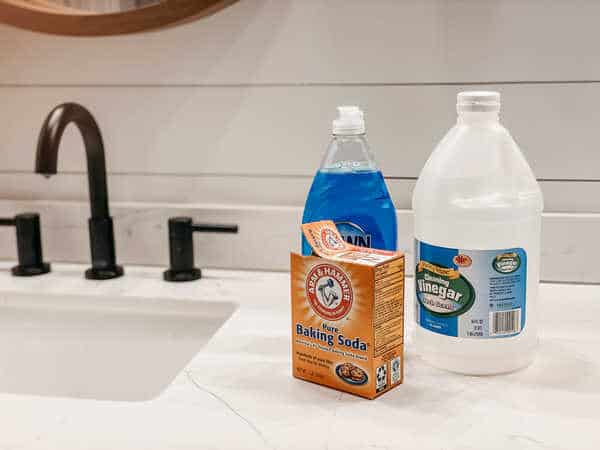 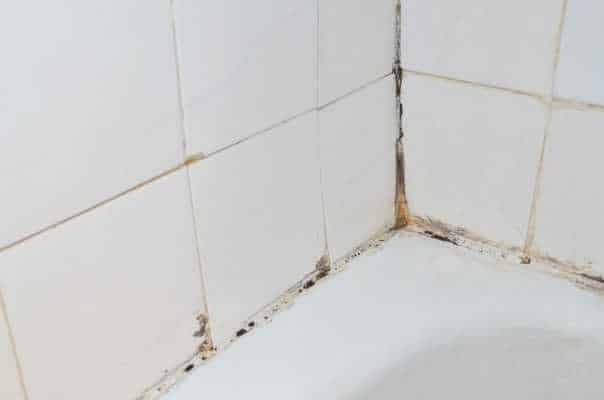 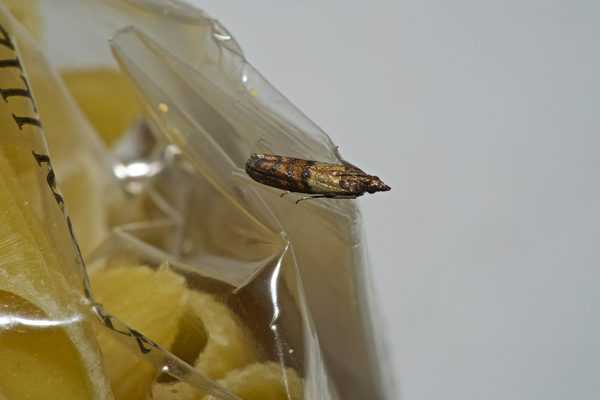 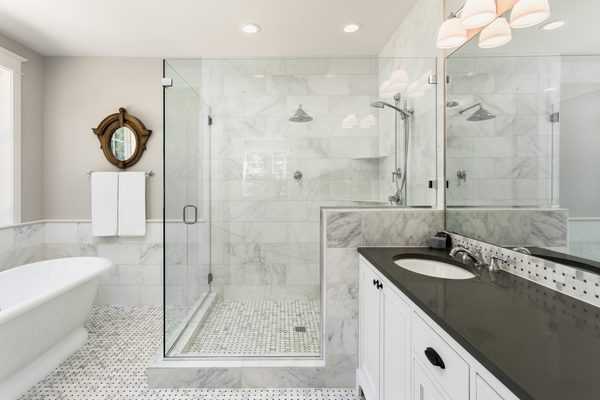 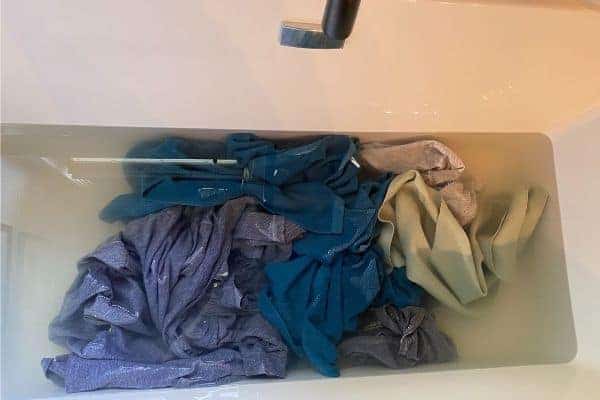 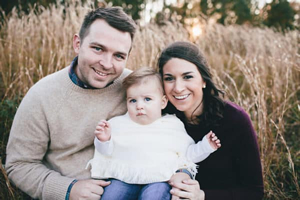 If you’re looking for advice on maintaining, renovating or creating something for your home– you’re in the right place. Learn more here… 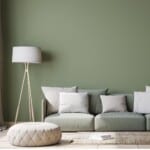 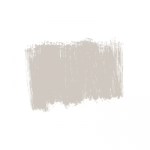 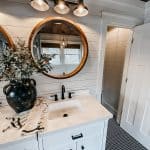 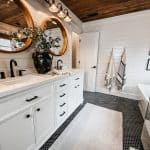 Shiplap bathroom in a modern farmhouse